Aerobic or Anaerobic... Which is Better?

I hope everyone has had a great weekend! I certainly did! I had a few awesome sessions with clients and groups that just continue to inspire me on a daily basis! It is remarkable what the mind can push your body to do!

I had a friend tell me on Saturday, "Mike, I have come to the conclusion I have a little voice in my head for your workouts and I named him Ron. Ron tries to tell me when I am done, for example, after 2 rounds of our circuit he tells me that's enough and to cool down and head home. Unfortunately, we all know you too well and that 2 rounds is far from done so I end up having to tell Ron to shut it and go away because I am NOT done."

Perfect example of how the mind works! You must continue to BELIEVE in yourself! In life, many events or situations come up where "that voice" will tell you to quit....but you MUST overcome it to reach your goals and strive for the very best! Just ask hometown running phenom Susan Grey, who is legally blind, yet strives to qualify for the Olympic marathon trials! I get the pleasure of swimming next to her on a weekly basis! Talk about inspiration! The biggest battle in life can be "Ron," and you must learn to overtake him and always accept nothing but the best for yourself! You are your own worst enemy, but you can be your own best supporter and rely on internal determination!

Recent studies have OFFICIALLY proven that short burst of energy and incorporating fast twitch muscle fibers are the best type of workouts to promote fat loss! This type of training tapes into your anaerobic energy systems which gives you the best bang for your buck, so to speak! 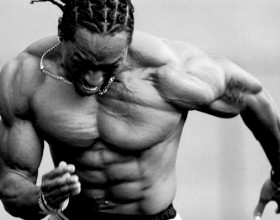 Now, I am not here to harp on distance running! Because I enjoy it as well and train for triathlons, marathons, and other endurance events which REQUIRE you to train in the aerobic zone. There is a time and place for endurance training, and I know some pretty amazing distance runners who inspire me on a daily basis!

BUT, this article is for those who ARE distance running and performing slow-steady state cardio in HOPES to get lean and lose fat. I am here to explain why you could be trying for years with no results!

There is lots of evidence that shows periods of high intensity, high volume exercise is the BEST for fat loss. So you do not have to spend hours and hours in the gym on cardio equipment to lose fat! A few quick 30-45 minutes sessions that are designed by me of course, will get you the results your after!

Lets take a little deeper and more technical look at this!

A large number of convincing studies show that high-intensity interval training is the best conditioning strategy for losing belly fat. In contrast, one research group that has conducted a number of experiments comparing aerobic and anaerobic training for belly fat loss write, “Disappointingly, aerobic exercise protocols have led to negligible fat loss.”

The reason this type of training works much better is because it requires the body to adapt metabolically! So you are constantly changing and incorporating movements that alter body composition.  This also elevates energy release for 24 hours post-workout, a term called EPOC, which I discussed in a recent blog post.

For example, a 2008 showed that a 6-week program increased the amount of fat burned during exercise by 12 percent and decreased the oxidation of carbohydrates—obviously, a favorable result for losing fat.  More impressive, a 2007 study showed that in as little as 2 weeks, active women who performed interval training experienced a 36 percent increase in the use of fat for fuel during exercise.

Interval training is so effective simply because it taps into different stores than aerobic training. Aerobic tend to burn carbohydrates first and activates parts of the body that are burning MUSCLE rather than FAT. Anaerobic training increases the production of fat burning enzymes and will burn far more fat cells!

The other reason anaerobic intervals are superior for belly fat loss is that they increase excess post-exercise oxygen consumption (EPOC) a huge amount. A 2006 review showed that protocols that are more anaerobic in nature produce higher EPOC values than steady-state aerobic training because the trained muscle cells must rest restore physiological factors in the cells, which translates to a lot of energy expenditure.

The following are examples of the superiority of anaerobic interval training for belly fat loss from the research:
•    A 12-week high-intensity interval training program produced a 17 percent decrease in belly fat in overweight young men. Subjects lost 1.5 kg of belly fat and 2 kg of total fat, while building 1 kg of muscle. Fat burning was increased by 13 percent due to the 3-day a week program of 20-minutes of cycling in which the subjects sprinted for 8 seconds and then did 12 seconds of recovery, repeating these intervals for a total of 60 sprints.
•    The same 20-minute cycling interval program produced 2.5 kg of fat loss in young women in 15 weeks, and the majority of the fat loss come from the legs and abdominal area. The sprint intervals were compared to a steady-state aerobic program that produced no fat loss.
•    A 16-week study had trained athletes perform either a sprint interval protocol or steady-state running four days a week. The sprint interval protocol varied each day, but an example of one of the workouts used was 10 intervals of 30-sec sprints with 90 seconds rest. The sprint interval group lost 16 percent or 1 kg of visceral fat as well as 2 kg of total fat, compared to the endurance group that lost no belly fat, but did lose 1.4 kg of lean mass. The belly fat loss appears to be small, but be aware that subjects were lean, trained athletes to begin with and had less belly fat to lose than overweight subjects.
•    An 8-week interval program using both high- and moderate-intensity intervals decreased belly fat by 44 percent in middle-aged men with type 2 diabetes. Subjects increased quad muscle size by 24 percent and improved insulin sensitivity by 58 percent—a dramatic improvement that highlights the other mechanisms involved in belly fat loss (muscle building, insulin health & blood sugar management).

Not only does high intensity training burn more fat, it also does it in SIGNIFICANTLY less time! Again recent studies have shown that high intense training for 20 minutes will burn more fat than aerobic training for 50! Shocker! So those of you on the treadmill for 2 hours hoping to burn fat will see me in and out of the gym in 40 minutes with twice the amount of fat burn and ALSO the benefit of building lean muscle!! Not to mention I will be at home reading that night on the couch still burning tremendous amounts of calories while your calories burnings topped as soon as you stepped off the treadmill or elliptical!

In less than half the time you can get better results with anaerobic training. A 1994 study is indicative of this: Participants did either 20 weeks of aerobic training or 15 weeks of intervals (15 sprints for 30 seconds each) and lost nine times more body fat and 12 percent more visceral belly fat than the aerobic group.

What is so interesting about this study is that the energy cost of the aerobic program over the whole study period was 28,661 calories, whereas for intervals it was less than half, at 13,614 calories. In less time, the interval group lost much more weight—nine times more weight. How do researchers explain it?

Perhaps most important, anaerobic exercise also elevates growth hormone (GH) —a powerful fat burning hormone that helps restore tissue and build muscle—much more than aerobic training. GH is released by the body in greater quantities in response to physical stress above the lactate threshold, which is the reason heavy, sprints are so effective.

Another hormone called adiponectin that is released from fat tissue during exercise also helps burn fat. Emerging scientific evidence shows that any time you perform forceful muscle contractions, adiponectin is released, and then your body produces a substance called PGC1 that is like a “master switch” that enhances muscle and metabolic functions, thereby burning belly fat. Naturally, anaerobic training is most effective for increasing adiponectin and PGC1 to burn fat since sprints and especially weight lifting require extremely forceful muscle contractions.

You will get results from a resistance training program that includes the following components:

•    Multi-joint lifts such as squats, deadlifts, lunges, split squats, step-ups, chin-ups, and chest presses in every training session. Add isolation exercises only if you have extra time.
•    Train with a higher volume—work up to more than 4 sets per exercise. Shoot for 24 to 32 total sets per training session.
•    Train with a higher intensity—include some training in the 70 to 85 percent of the 1RM range.
•    Include short rest periods (30 to 60 seconds) and always train a “finisher” that requires near maximal effort for more GH response (25 reps of squats or 2 minutes of leg presses, for example).
•    Count tempo for every lift so that you apply a specific amount of tension to the muscles. In general, opt for longer (4 second) eccentric tempos and short or explosive concentric tempos.
•    Shoot for 3 to 4 hours of total training time per week, which includes resistance training and a few short sprint sessions.

Cortisol is the stress hormone that is elevated when you are under both physical and psychological stress. Research shows cortisol is chronically higher in endurance athletes—one study found that aerobic athletes had significantly higher evidence of cumulative cortisol secretion in their hair than controls.

Strength training outweighs this hormone because of the GH hormone that is produced when resistance training so there is little effect! If the GH hormone or testosterone is not elevated, cortisol can be catabolic and eat away muscle tissue!!!  WORST of all, is that this hormone increase the inflammation response, which can lead to fat gain!

MOST IMPORTANTLY....I feel this type of training is much more fun than slow aerobic training.  You can be in, out, and on your way from a short 30 minute workout that produces twice the results and leave you feeling energized as compared to slow training!

There you have it! Simple research has proven this type of training is BEST for fat loss! Now its your job to give me a call or visit my website to start your training that will deliver those results!

By the way, my favorite High Intensity Exercises:

- Hill Sprints! Just ask a few of my training partners how I feel about them and Come watch me at Norlo Park when my knee is better! 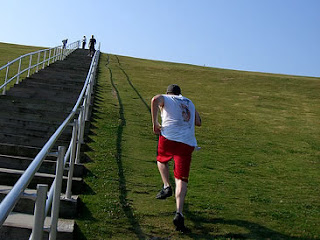 "So much can be accomplished with a long term vision and resilience to short term setbacks. Not every problem is conquered overnight, but if you persist and never give in, you will succeed."

Ismail, I., Keating, S., et al. A Systematic Review and Meta-Analysis of the Effect of Aerobic Vs. Resistance Exercise Training on Visceral Fat. Obesity Reviews. 2012. 13, 68-91.