Last night I got the chance to listen to a phenomenal runner and human being! Bart Yasso, the chief run directer for Runner's World Magazine. 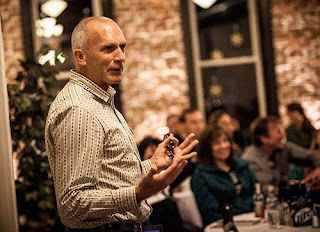 What isn't there to say about this guy! He's been all over the world and literally has done every race available to human beings.  Whether it was an ultra marathon in Death Valley, where his bread would toast itself when held out in the sun for 30 seconds, OR it could be a nude 5K bare buns run!

Throughout Bart's life, he advocated one thing.....how running brings a community together! Hmmmm....well think about it.

Here we have a guy who gets to be ANYWHERE he wants at any given time in this world.  Heck, the guy was just in the Bahamas and Miami days before coming to Chambersburg! But my point is, Bart displayed the true definition of an athlete. He is passionate about the sport and ALWAYS looks to put others before him in his travels and work.

Community....the perfect fit to describe runners! Especially in Chambersburg. All the runners are open and accepting of everyone here! Which is exactly what Bart told us time after time. No matter what your ability level, background, or family life, you are apart of something great when you join a group of runners.

Today I had my Rush workout and time after time I noticed a common theme.  After any exercise that was difficult or intense, each and EVERY runner there would push the others around them or help motivate eachother to get through the workout. It just goes to show what family is all about.  You build relationships, many of which are lifelong!

Bart didn't just open our city's eyes to what running is about, he just came and re-emphasized because it is entirely true! Running builds character. Anyone can run, build not everyone can do it in the rain. Or at 4am. Maybe even running 20 training miles on a treadmill because you have kids that need watched.

Its a true test of drive, and intrinsic motivation and determination that keeps a runner going!

Thanks Bart for a great talk last night! You inspired many!

Not to mention he even ADMITTED to doing weight training! The chief executive of Runner's World does weight training, so I think that is a big statement for you to give me a call and get in with the best runners in town and start resistance training the way a runner should!

Until Next Time,
Mike Over
CPT/ Strength & Conditioning Specialist
Posted by Over-Achieve Fitness at 5:33 PM